Waking up to begin the first day of my sixty-second year in this life was no different than the day before. Except I feel different. There is something about knowing that this was the day my mother gave birth to me. Even if another day of spending morning time with the dogs before sequestering them to our little office for most of the day, before the contractors arrive and continue working on the addition to my house that will make room for my mother who is scheduled to move here in a month. Another day of anticipating progress, challenge, and the angst of it still not being done. The voice of the architect in my head knows all to well where there can be mistakes and delays and that the stress of not knowing or being able to control will not go away. Another day just like the past hundred and twenty days we’ve been at this. Meanwhile, the voice of my mother has me obsessing about the exterior paint colors. The voice of the dog lover continues to struggle with keeping Yogi and Nora so contained for so much of the day in the wake of a broken invisible fence and a winter of too many ugly days. The voice of the artist is struggling to express just what is there instead of thinking too far ahead. And the voice of the little girl wanting to be fussed over for her big day doesn’t want to yield to the mature voice of the grown woman who has chosen daily solitude and beauty.

After too many days following a schedule of work inside, I finally got back into the woods yesterday. Just a simple meander through the mostly clear of snow ground that is primed for warmth and new growth. The brook is running fast and furious and the smell of spring is finally in the air. 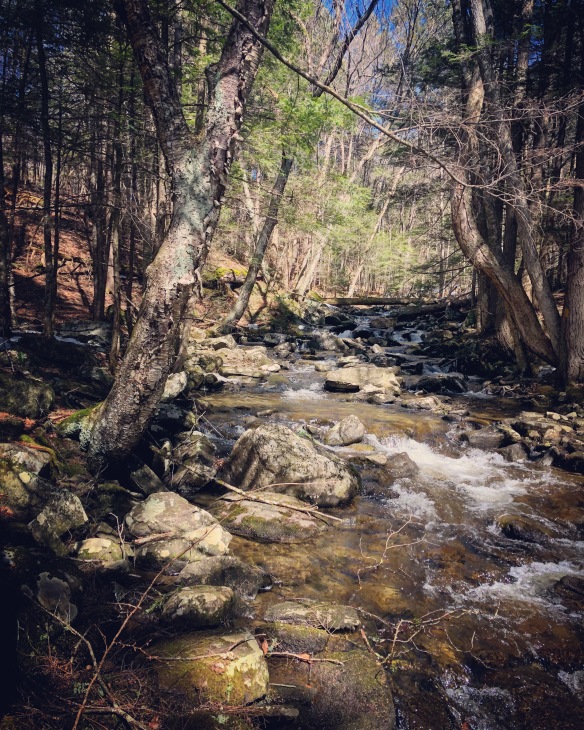 I took Yogi with me. On leash of course, because once he began to take off and follow his nose last year, I had to stop letting him off leash. Because he, unlike Nora, is a dream on leash. He walks calmly beside me, without a hint of a pull with his strong ninety pound plus body. We become one in the woods in a way that feels safe and easy.

I think back to the days when I would walk the woods with both dogs romping off leash around me. When the wild woman voice in my head said this was what they needed. And yet how tense I was, so worried that they wouldn’t come back. Worry that finally bred the result of what I feared most. That Nora would make trouble in a neighbor’s yard, and that Yogi would disappear, only to be found on the main road amidst speeding cars. So, this period of construction, with all the change it has brought and will continue to bring, has given me the space to do things differently with my beloved canine companions. We are finding a new way together that includes giving Nora the safety and love that a good house dog needs and letting go of the belief that she can only be happy if she is running free and wild in the woods.

It is my son Ben who is making the fuss about my birthday this year, determined to take me out to dinner at a new restaurant he has been wanting to go to. ‘I will pay,’ he tells me. But making a real plan has involved collaboration with his resident advisor, who helps Ben take charge of the plans he is so intent on making and executing. My need to control voice wants to make it easy for him, wants to just make the plans for him. But the tough love Mom voice insists he call me and tell me where we are going and what time I should meet him. He resists. He offers his characteristic, ‘I don’t know’ response. But I don’t budge. I even laugh when he says his advisor will tell me. I don’t spare his feelings or let him off the hook. A voice of doubt and guilt becomes loud for a moment, telling me he is intellectually disabled for God’s sake, give him a break. And then like the tide shifting and moving in the other direction back out to sea, Ben speaks up in an empowered voice of his own and clearly tells me the plans.

I was telling my Mom this story this morning, sharing the relief of knowing that he CAN, and that he DOES know. Mom simply said, “He thinks with his heart, not his head.” And wouldn’t it be grand if we could all do that. It’s not easy. The voice of the student in my head is humbled. The voice in my heart hopes to keeps learning from the wisdom of Ben.