Its not that I actually spent endless hours in the kitchen. It’s that entire blocks of time, even whole days, were conditioned by the time required to prepare certain foods this past week. A clear pattern formed. Bursts of energy would go into kneading, rolling, rubbing, and chopping. The spaces in between would fill with anticipation, potent creative juice that would send me to a quilt or book chapter in process, a walk in the woods, or to my imagination for what the next meal would look like to accompany the fruits of my effort; a frittata that used up all the bits of leftover vegetables in the bin combined with the fresh eggs and feta cheese from a local farm store to go with the fresh bread, or a simple onion sauce to go with homemade pasta.

Most of these efforts have been born out of a desire not to spend valuable time and money at the grocery store buying things I don’t need. All I really need is some good grain and flour for making bread; produce, meat, eggs and cheese from the local CISA farm I support. This past week, my experimentation with making levain starter has paid off, and the round crusty loaves, proofed and baked in a cast iron pot, emerged crackling as they cooled, yielding moist airy hearty sourdough crumb. 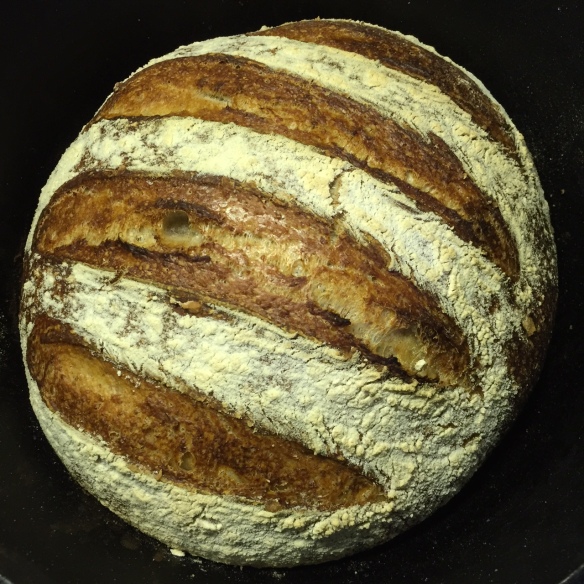 One snowy cold afternoon I decided to try making filej, an Italian hand rolled spiral pasta from a recipe in “Cooking with Italian Grandmothers” by Jessica Theroux. I love this book full of hand-earned wisdom. Making the pasta took a long time. First kneading a stiff dough made from semolina flour and water. Then hours of rolling thin ropes to be cut into small pieces, each twisted around a skewer and formed into a smooth spiral with one swift roll with the palm of the hand. 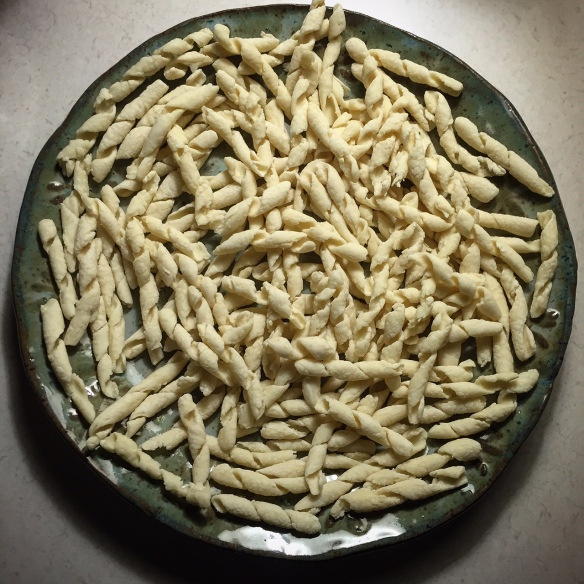 Like learning to ride a bike, once the feeling of the motion registered, the process became automatic, but each piece of pasta sliding off the skewer was still as different from, and as equally unique, as the last.

I stood at the sink rubbing corn that had been boiled and soaked for a day, rubbing vigorously to remove the brown husks still clinging to the bright yellow surface of each kernal. Part of the large colander full would be used to make posole or corn stew of some sort. the other part would be ground and made into tortillas.

So much time was being devoted to this task and I was loving the process until the thought popped into my head, but is this progress?

All week I had been loving the time invested in these tasks of turning something whole and raw into something delicious and nourishing. I wasn’t worried or second guessing why I found such enjoyment here. Only when the thought of this not so innocent question that came accompanied with hints of guilt and fear, did I think that I should stop the current food-inspired flow. I was forced to consider how my actions constituted onward movement toward a worthy destination. I struggled to find acceptance in the simple forward movement of my seemingly simple actions that allowed me to dwell in the meditative spirit of doing nothing, going nowhere.

I have to remember that anytime we create new capacities or resources, we also introduce new threats – so progress, defined in the way I have grown up, is never a simple forward movement. I think about my reluctance to embrace so many of the efficiencies created by industry, how processed food and fast food has introduced a whole new host of medical issues to reckon with, altering the core of systems we need for our very survival. And how ironically, our medical system has sped ahead to create even more efficiencies without even considering the impact of its supposed progress. I don’t want to accept this. I don’t have to accept this.

Eventually, I came back to knowing that there’s nothing wrong with doing nothing, going nowhere. The leftovers from the roasted chicken dinner with carrots and purple potatoes would combine with the corns for a hearty stew. 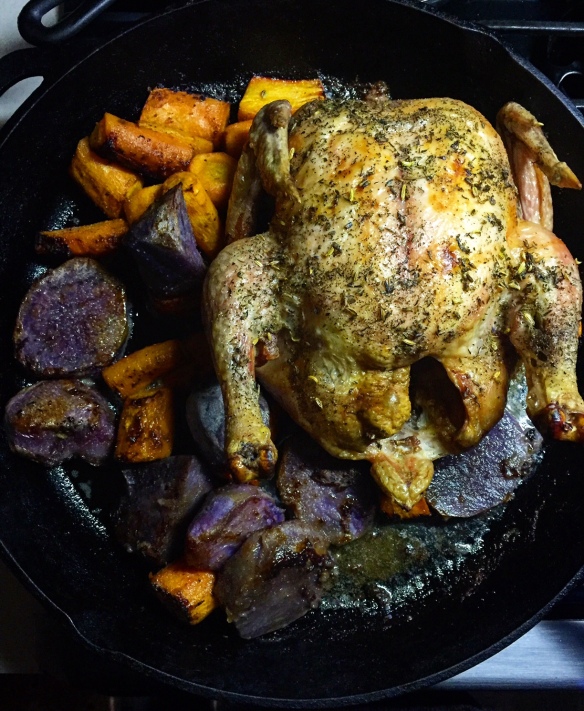 I came back to feeling the compassion and equanimity that lives in this space. Yes, we do what we have to do to survive. And yes, infinite beauty and hope can co-exist in the simplest ways of survival too.