I have started flying again. Not in an airplane kind of flying. This flying is just me, one moment standing on the ground on my two legs with the thought, taking a few steps to initiate lift off, becoming horizonal above the earth, and then simply gliding though the air. There is no surge or need for overt power here. It is as easy as taking a breath. As exhilirating as the most unanticipated discovery. As natural a movement as any other I have ever experienced.

Crazy, right? You could say I am dreaming. My eyes are closed. I am lying in bed presumably asleep. I know I have flown like this before, and I know this way of being with the world is completely normal. No surprise, the flash of lonliness that appears. Who else flies like this? Until now I’ve never thought to ask or consider that there could be a real conversation with another about flying. I’ve never trusted that I could be heard and be able to continue the conversation even if they didn’t see or understand it my way.

A friend recently sent me a podcast of Brene Brown and Krista Tippett about ‘the spiritual practice of belonging’. (https://itunes.apple.com/us/podcast/on-being-with-krista-tippett/id150892556?mt=2&i=1000401797450)  It is a wonderful conversation, where Brene Brown offers this,
“What if loneliness is driven, often, by changing who we are, being perfect, saying what we’re supposed to. What is loneliness is driven in part by our lack of authenticity?”

It would be easy for me to dismiss this flying as just a figment of imagination, to want the acceptance that would come from such a view. But that would not be an authentic me. To acknowledge my own desperate wanting to belong I need to say, yes, I want to be part of something, AND, I want to stand alone, to fly all by myself, when I need to. It’s terrifying. But as Brene Brown goes on to say, “Your level of true belonging can never be greater than your willingness to stand alone and be yourself.”

It is no coincidence that another friend also recently recommended I watch a Netflix series called Sense8. We had been talking about unrest in the world, how the black & white of political/economic separation is creating a context that is increasing unbearable to even talk about. He has found some hope in this show that depicts a world where difference can be celebrated through ultimate connectivity and intimacy with others across the globe, within an intact individual identity that can communicate telepathically. It is classified as science fiction, but for me, this show vibrates with a completely believable portrayal of humanity offered in both difficult and beautiful, always heartfelt, ways of love.

Last spring I ventured deeper than usual into the woods in front of the swamp I knew was there, but had never actually seen. There was a call of the wild that I had been hearing in the days prior, and finally couldn’t resist. It turned out to be a nest of herons located high up in a lone tree growing out of the middle of the water. As Yogi and Nora romped in the vastness of the swamp waters, I watched as the birds flew back and forth from this perch, emitting their distinctive cries. there was a lumbering grace to the large bird being horizontal in a way that felt familiar. 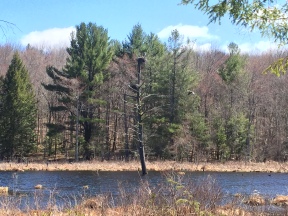 I want to remember this feeling of gliding so easily between worlds, between truly authentic me and a community that can hold a truly diverse and sustainable way. A world where flying like a bird, or communicating telepathically, or even standing alone, can be normal too.