On Christmas day in the woodlands behind home, an extremely beautiful light was seen emerging from behind an otherwise blustery, snowy display of winter. 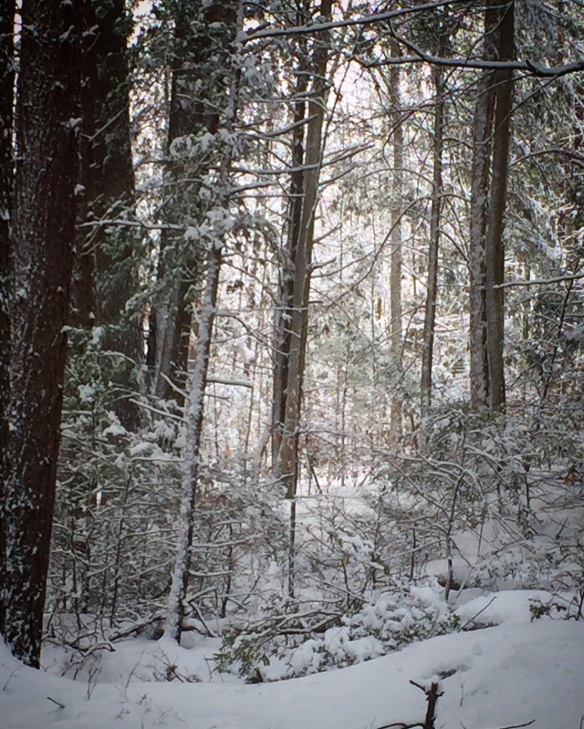 Today was also one of those spectacular winter days with intense bright sun and frigid air, extremes that also came together in a most compelling and refreshing way. It was the kind of day that was impossible to stay indoors for too long. Walking into the woods, body wrapped in layers of down and wool and protective footwear, felt really good on the one hand. It also felt really hard on the other. Soft fluffy snow on top of crunchy crusted over snow wasn’t deep enough for snow shoes, but just deep enough to make each step a slippery challenge. I was frustrated that I hadn’t brought my cramp-ons but I wasn’t going to turn back. Cranky and feeling the pressure of moving too slow, I urged Molly to go ahead, even if I didn’t want her too. The extreme beauty of the day had tossed me back into the turmoil of extreme emotion. What was this? How dare these extremes play with me so. Bittersweet feelings, my almost sixty year old body and soul wanting to just move as it wanted to move, not any faster, not any slower, not to the expectation of any other. I thought of all the years when my younger body and soul moved fast, really fast, and no doubt projected what could only be felt as the nature of my extreme energy then, to whatever companion I was with. I witnessed the flow of cool clear water co-existing with the beauty of crystallized snow,

compassion for my younger difficult self washed in, and I eventually re-united with Molly further up the path.

My current knitted project is more ambitious than usual. Using number six needles and thinner yarn, I have been experimenting with texture, mixing knit and purl, and a palette of color that features extremes as well, warm white accent in relation to purple, blue, green and gold. This one is taking a really long time. It evokes something traditional, perhaps even Peruvian or South American, as if to create some sort of context for the reality of my daughter actually being home here, in this very different home than where her heart has been for the past three years. I set the two small balls of yarn I am working with down into the bowl of crystals this morning (so Yogi won’t get them).

Another kind of extreme. Of soft glowing color resting with very hard and and dense, but equally glowing color. Both earth’s elements. The only seemingly insignificant difference is that the molecules that define one are simply moving slower than the molecules of the of other…