Ben and I were two of the many thousands that filed through a lineup of security checkpoints, into the Grande Theatre at Foxwoods Casino (in CT) Friday night to see Idina Menzel. I didn’t know it was the opening night of her North American 2017 tour. I didn’t know just how beloved she was. I might have guessed when Ben, months ago, from a wide selection of Broadway shows, concerts, and performances available to choose from, specifically chose this concert. With the guidance of his teacher Danielle, he bought the tickets with his own money, orchestra seats of course, only the best for Ben, and we put the date on the calendar. It was a sold out concert.

I contacted Anne, Ben’s godmother and an old friend from NYC days. She had taken my place in the cheap East 81st Street ground floor apartment when I left for graduate school in 1981. We became friends over the years and by 1993, she was the one at home taking care of Molly the night Ben was born. We were NYC junkies together, artists in spirit, mutually self-reliant, sharing our early days of motherhood and the importance of community. She lived in her rent controlled apartment in Styvensant Town and we lived in our rent controlled loft just walking distance across town. Those were the days when I remember standing at the window of our loft looking out into the sea of humanity walking by, anonymous, seeing, but not feeling seen, the line between public and private being both transparent and completely impenetrable at the same time. Anne and I hadn’t seen each other in years.

Her country home in CT just happened to be a half hour away from Foxwoods and she invited us to stay the night with her. It made the surreal drive through bucolic Connecticut countryside into the fantasyland of Foxwoods a little easier. It was an abrupt transition, making the right hand turn into the complex. At least in NYC, the sense of fantasy lurking around the corner was everywhere, embedded in dense fabric of human and manmade constructs. But here we had to move fast through the inhospitable concrete landscape, only to emerge into a different world. I’ll never get used to it, the huge hospital complexes, the giant malls and chain stores, the efficiently built but airless office buildings, the Disney-lands and Las Vegas wannabes.

There were no signs guiding us to where we needed to go at Foxwoods. You just needed to figure it out. I took the plunge and ventured into the self parking garage, trusting we would find our way. And we did! Foxwoods, it turns out, is nothing more than big mall of stores, theater, and hotel that is organized around a center casino. Once inside, it is actually impossible to get lost. I marveled at the efficiency of this design that was all about spending money. I was able to relax and flow with Ben’s infectious enthusiasm now, his excitement of finally seeing Idina.

The Grand Theater at Foxwoods is indeed grand.

We settled in and the show began with Idina herself, no warm up performances to wait through. It was an exciting, well crafted, and beautiful show, full of her Broadway and movie classics, cover songs, her own original pieces too. When she began “Seasons of Love” I was instantly transported back to over twenty years ago, seeing her perform this in the famous Broadway show ‘Rent’. I felt the power and emotion of the production that dove into the heart of being a struggling artist in NYC as if it were yesterday. Being able to pay the rent, in order to be free to create, is the theme that brought me right back to my connection with Anne. We have each had our own paths, but as we sat and caught up in her newly renovated country kitchen, I marveled at how the feeling of the artist in each of us has emerged unaltered from the passions of our NYC days, in the creation of our respective country homes. We’ve both chosen to live alone in the country for similar reasons. We shared the questions that have fueled our creativity and considered how next steps might flow naturally from these efforts. It is rare to see and be seen so completely. It is a good feeling, one that can be tapped when endeavoring to truly see all others.

Not coincidently, Idina’s encore was a perfect expression of how I was feeling. She told of a South African greeting, to say “I see you” to another. After taking in the energy of the sentiment, the other responds, “I am here”. She wrote a song about this, sent it to friends and colleagues, asking for a video response. A black and white montage of these responses was reeling in the background behind a transparent gauze curtain as she sang her song, her last of the night, singing to the sea of faces with heartfelt sincerely, 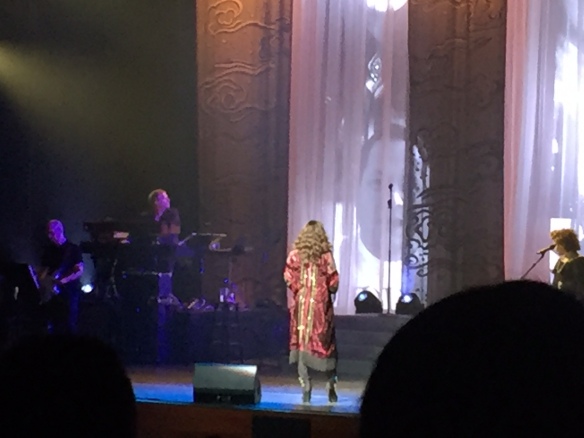 ending with the image of her own face looking out at us as she sang, ‘I am here’.