Two and a half years of walking these woods and I have seen no wildlife to speak of. Yes, Nora got sprayed by a porcupine, yes, I could see scat on the trails, prints in the snow, yes, the sounds of woodpeckers and birds followed us. But I’ve never actually seen another living thing except the back end of a slow flying turkey making fight and the frozen stare of one lone deer getting ready to jump the brook. Last fall there was a family of otters that swam the back side of the pond, retreating to the furthest corner when we approached. That’s it. I had gotten used to the feeling of walking the trails with just flashes of dog to accompany me.

Then last week as we approached the pond I noticed something gliding, leaving a small wake as it moved through the water. Instead of retreating, this animal turned and began to swim right toward us, staring straight at me, at least that’s what it felt like. A beaver!

What did I know of beavers except of their engineering prowess? Was this guy patrolling/protecting or just curious? Clearly he wasn’t afraid of us. As he was closing the distance between us, I moved quickly and called the dogs to keep moving along the trail, noting the edge of fear that propelled me away.

He/she she was there again the next day. Same dance, same result. I was humbled by how nervous I felt in the presence of a wild animal that wasn’t afraid of me. But then, he/she had the whole pond to hide in if necessary. I called again to the dogs to keep moving and the beaver slapped its tail and disappeared under the water. We moved along without waiting around to see what would happen if we stayed.

As we approached the pond yesterday, we were greeted by the loud honking of geese. Not the kind of cries from the sky that announced arrival or departure; this was like a conversation, a back and forth between two creatures.

There was just two of them, and like the beaver, as we approached, they actually began swimming toward us, continuing their lively banter. And much to my amazement, the beaver was right there with them. What a scene. Two geese, two dogs and a beaver. 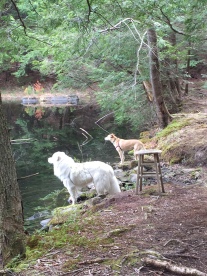 For years I used to say I lived with two kids, two cats, and a dog. It rolled off my tongue like velvet, it felt good. I lived in a household that was rich in life that coexisted in harmony like a team. I didn’t realize how much I missed this until now, regarding the way in which these animals were all focused and communicating with each other in what seemed to be a trusting way. I finally felt how I was part of it too, not just an observer. I felt the urge to sing out loud like these geese. To say clearly whatever was there that I may have been silent about for too long. Did I dare? I decided to stay, sit and absorb what was being offered in this moment. We were an unlikely team, all of us there at the pond, but a team nonetheless. My job in this moment was to discern what endeavor was calling, how teamwork would be essential to the effort. Where my loyalty to living and modeling a sustainable life was leading me. The beaver circled around to the center of the pond, slapped its tail and dove out of sight. He didn’t reappear, instead, leaving a reverberation of presence in the center of the pond. 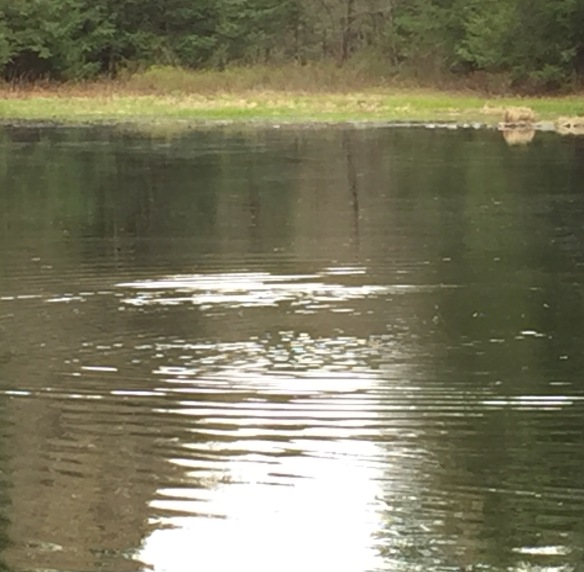 Later, as if to make sure whatever message I needed to get was being delivered, Yogi stepped into the center of a pool in the brook. 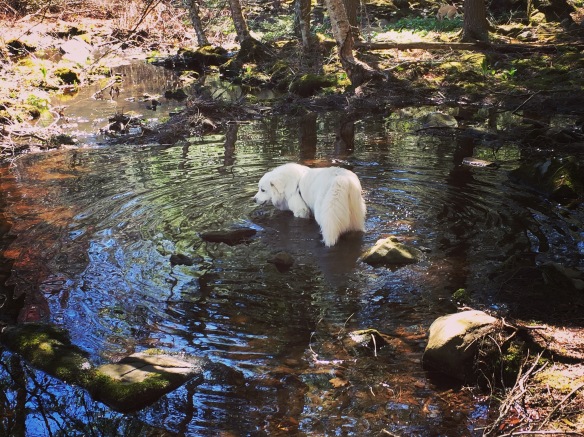 He transformed, became part bear in that moment, staying visible, inviting me to consider how a dream of making housing to serve developmentally disabled persons, and the developmentally challenged community of which they are a part, might actually become real…

1 thought on “two geese, two dogs, and a beaver”