It is just when I think I’m finished with the writing of my stories that have been forming into a book, that I think the next round of editing could be done by someone else, that this piece might truly be complete, that the nagging inside of ‘there is more to do’ finds expression. I have been sharing the developing chapters with my writing group for four years and it felt significant that I recently put a full working draft into their hands after all this time. My gut told me I would hear from these trusted colleagues what I already knew. They indeed gave me words for what more I could do, and led me to acceptance of where I am. I simply have not reached that moment in the process where I can confidently let go. After years of architecture projects and quilts that spanned years before completion, I am well acquainted with this feeling. Writing as a form of creative expression is no different. Time to strap myself back in the saddle and go for a longer ride.

It’s why the unexpected twists and turns in the path through the woods each day is so nourishing. No matter what the weather, the temperature, the season, or the temperament of dog cavorting with human on any day, I know that at the end of our time there, I will be inspired in some new unexpected way and will result in some creative act, even if just capturing the essence of where I am in that moment. Now, after weeks of deep snow, we were finally able to get out for the much needed longer walks we were used to, 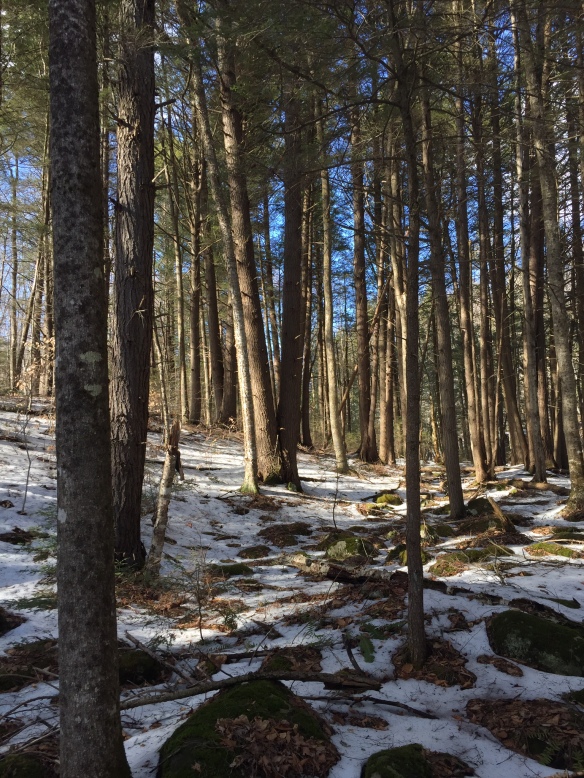 taking in the distinct smells and sounds of earth accomodating melting snow.

It’s also why the smaller efforts that take place in the kitchen have become so important. They are my fix, a point of punctuated pleasure in making something uniquely delicious right now. Even the things I have been making for years over and over that I keep coming back to like the ‘Small Macaroni Woodsman’s Style, with Mushrooms’, by following Marcella Hazan’s recipe in her book “More Classic Italian Cooking”. (Also referenced in Oct. 12, 2011 post called ‘woodsman style’) The only serious straying I do from her recipe is to substitute uncured turkey bacon for the ham. An impulse for making this dish came last week after purchasing some orecchiette. Next time at the store I bought the fresh mushrooms called for. I’ve been making this pasta for over twenty years, and most consistently use dried porcini mushrooms as well. It took over a week and repeated failures to acquire these dried mushrooms, and I finally ordered an entire pound of them online. Gorgeous pieces of the woods in a bowl ready to be re-constituted with a little warm water.

From impulse to actual preparation of this woodsman’s style pasta, it was now almost two weeks. Here, I was making progress in being able to follow the natural flow of an impulse to its natural conclusion, no matter how long it took. It was worth the wait. My weeks of missing the nourishment of woods essence was satisfied here too.

Then there are the broad sweeping changes I will make to something like the ever evolving Apple Cake**. There are no limits to what I won’t try in an effort to enjoy the abundance of canned apples from my own trees. This morning I came across the most recent version of a recipe I wrote down toward this effort. And proceeded to do something completely different. Instead of creaming the butter with a cup of sugar, I endeavored to cream it with a cup of maple syrup. I finally gave up after rounds with both the electric mixer and wooden spoon, when the butter was broken down to a out rice size pieces and I could accept that this would not be a creamy fluffy blend like what happens with sugar. Adding the eggs and cream helped. By the time I added the flour mixture and apples, it didn’t matter anymore, this looked and felt like cake batter. And it came out of the oven with the sides of the cake provocatively shrinking from the sides of the pan just so, the top golden brown and glistening. So much promise here.

After cooling in the pan for at least an hour, I finally cut a piece. The first wedge lifted out of the pan like a prize fighter in perfect form. Not a crumb left behind. I sprinkled a little powdered sugar on top as the fragrance of spice and apple was fully released.

I gave it all a moment of reverence and then took the first bite. It had spring. It was light and moist at the same time. The tastes were all perfectly melded, not too apple, not too sweet, not too anything. Just sublime. I can’t wait to see what kind of apple harvest there will be this year in anticipation of making more canned apples and more cake. This recipe will bear repeating. Something to put in the file along with woodsman’s style pasta.
**Apple Cake Redux

Pour into 12″ round cake pan prepared with butter & flour

350 degrees for 35 minutes or until toothpick comes out clean.