Ben and I did some serious Glee bingeing during this holiday break, watching two whole seasons from the DVD’s Ben received as gifts. Not that we haven’t already. There were days of watching episodes on Netflix years ago, sitting on the couch together in front of my iPad screen, thoroughly enjoying the charm of a world where anything goes. Season One began in the fall of 2009 and the show ended with Season Six in 2015. It is the kind of entertainmnet that you can watch over and ver, get invested in the characters and the trials and tribulations of show choir, at once both absurd and relevant, funny and poignant, and marvel at the talent of so many. This show has everything, explores every possible social issue that threatens and/or binds us to each other in community. Each episode is some mix of unadulterated ambition, musical history, diversity, ethnicity, high school politics, adult politics, arts versus athletics vs. academics, competition, inclusion, relationships, religion, media, education, poverty, obesity, bullying, disability, surrogacy, homosexuality, bisexuality, transgender, mental illness, tolerance, intolerance, parenting, death, family, divorce, failure, humiliation, success, shock, and miraculously, through it all, just plain fun. Every issue is taken to a limit that invites speculation. Even the character of Becky Jackson, who has Down Syndrome, is cast first as a fallible human being with both desirable and undesirable behavior. The portrayal of her nastiness being born out of a need for survival in a brutal high school environment, seems completely normal.

It is a brilliant production and I wish there could be more. It feels prophetic that this show occupied the space of the Obama years. Party politics aside, I do wonder at the value of having such a rich portrayal of humanness being a benchmark for moving into the years with this next administration. Reminds me a little of Christmas dinner this year, where tolerance reigned in a beautiful way when the subject arose and differences of opinion about the future of this country were expressed. It could have been ugly. It does my heart good to witness where diversity can live in community in an authentic way. 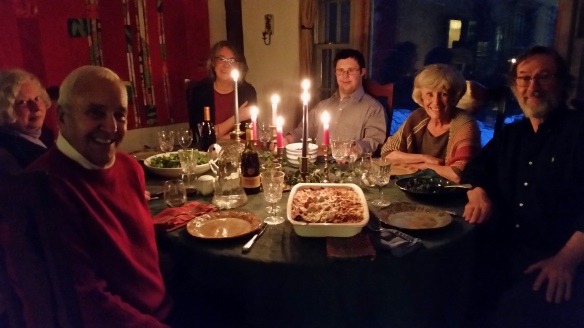 So for the past week, Ben and I settled into our favorite seats in the warmth of the wood stove and watched an episode or two of Glee at a time, got up for a walk, an outing, some quiet time, or to prepare a meal, and when finished, would come back for more. Our favorite outing was to go visit with Lily and Jay and their baby son Jack. Jay is a musician, Lily a special education teacher and it was great sharing about the brilliance of Glee with them too.

Making dinner became a ritual Ben made sure to be present for each night. He has some favorites, and it does my heart good here too to witness his enthusiasm for watching and learning. This vacation he was focused on making pasta with tuna sauce**. It was the first thing he asked for after Christmas and seemed to set the tone for the simple meals of delicious winter easy. It is also one of the few meals I have the tolerance for making with primarily processed foods. 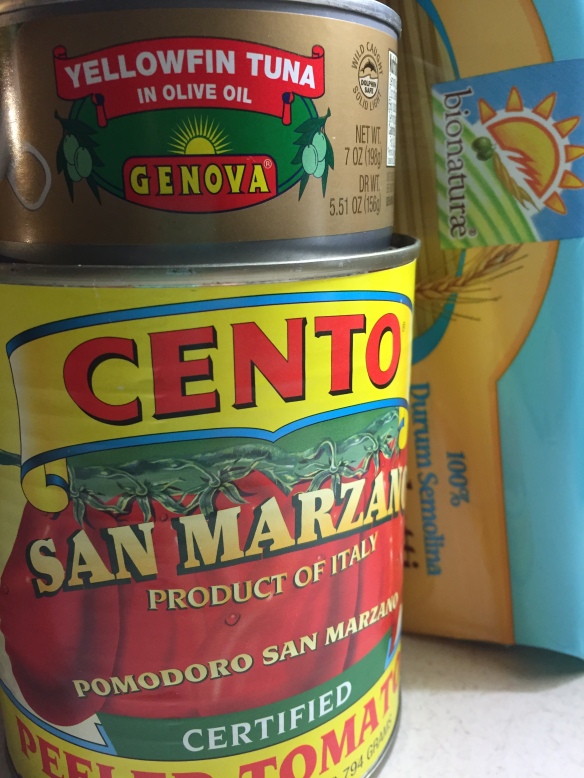 Of course Nora joined us for all the fun, alternatively stretched out in front of the fire and then up to Ben for hugs and kisses. 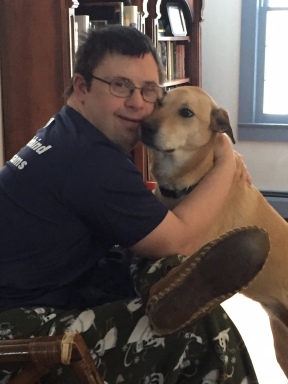 It was significant as we were leaving to take Ben back to his father’s for the rest of vacation, that the last thing he wanted to do was to say goodbye to Nora, down on his knees in a full body hug. Blessed be.

**Pasta with Tuna Sauce, for 2

1. In a large saucepan that can hold sauce, vegetables and pasta, saute garlic for a moment in hot olive oil, add tomatoes (squeeze whole plum tomatoes by hand, mash diced tomatoes to be more pulpy), cover and simmer on low while water is boiling for pasta. Oil and tomato will separate. Sir a few times to mix.
2. Add pasta to boiling water, cook to desired firmness.
3. Add fresh parsley (and vegetables) to sauce, cover and cook until just soft, just a few minutes. Turn off fire, add salt and pepper to taste.
4. Drain pasta and add to sauce. Mix thoroughly. Turn fire on to high and ‘stir fry’ for a few minutes. Turn off fire and let sit for a few more minutes with cover. Serve warm.