The bread dough is proofing and almost ready for baking. The peel that holds the loaves within parchment paper and towel formed couches is sitting in the sweet spot. It’s the place where virgin levain became ripe and vibrant in just three days, and where the levain starter prepared last night for today’s bread more than doubled in volume overnight. After weeks of failed risings and bread so utterly dense and inedible that it had to all be thrown away. I had been taking the levain and subsequent containers of fermenting dough up to a closet on the second floor out of sight and out of mind because I assumed it was adequately warm and draft free as dough rising places should be.

Clearly something needed to change. I started all over again with a new levain, and decided to keep the fermentation process out in the open where I could be in relationship with it at all times. It is a living thing after all. The process of teasing yeast naturally from flour and air is an art I can well appreciate for the effect that attitude and place has on coaxing a vision into form. Setting the bowl at the end of the wood table in a corner of the room that is the heart of the house, where dough could capture the heat of the sun through the window and of the woodstove when it was full of fire had been a passing thought that proved to be the right one. I could watch and covet every bubble and burp,

as it became an integral presence with us all.

Magic was happening there in a way I’d never experienced in all the years of making bread. I’ve rigged up cabinets with heating pads, set up stations next to fireplaces and wood stoves behind protective screens in addition to the assortment of closets presumed to be adequate. Now, finding a place where everything feels just right is not something to take for granted.

It was like finding the blue chair at the brook last week.

Coming upon it in the section of the woods newly discovered wasn’t a mystery. I assumed it was simply someone else’s sweet spot and not for me to sit in and experience. But after a week of walking past it, I finally sat down. And considered view of stone and water and wood and dog from this particular point of view. 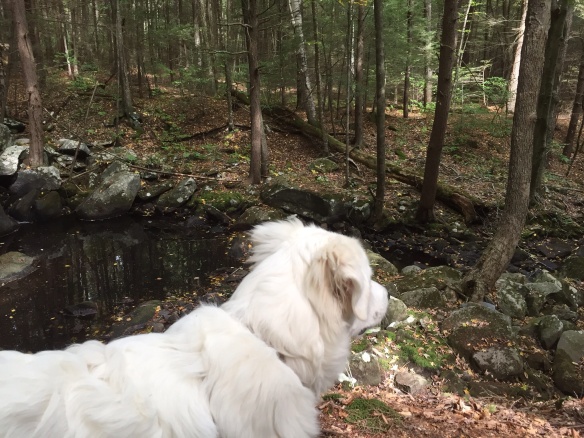 Yes, there was magic here for me too. Sweet spots want to be known and shared.

I was talking with a friend yesterday about the practice of not making assumptions and where I first encountered this way of thinking in Miguel Ruiz’s little book called ‘The Four Agreements’. I can’t assume this recent batch of levain developed so potently because of this particular place. There could be a hundred other possible variables and this is not a problem. I can narrow the range within which success is possible, but the success will always be relative. This batch was made from two different varieties of wheat I hand ground myself just hours before using it.

There will always be a reason to try something new if I want. Similarly, I can’t assume that sweet spot of being with myself without excessive drama these days is solely a function of not taking things personally (one of the other agreements in Ruiz’s book). After too many years of putting myself in the center of every problem, it is a relief to step aside and consider all the ways that simply being in relation works or doesn’t work. And choose what works for as long as it works. Even with bread dough.

The loaves are out of the oven now. The smell is intoxicating and it is a sight to behold, two nut brown crusts fully expanded to their very reach. I’ve set them in the sweet spot to cool, where I can listen to the gentle crackle of bread coming to rest. 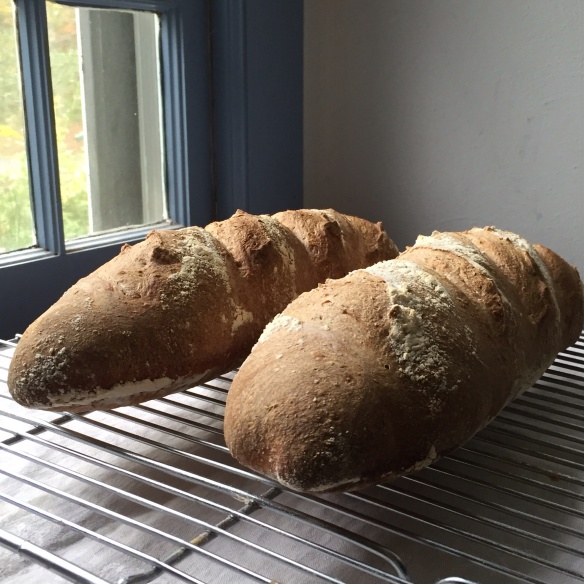 A few warm slices with some aged cheddar cheese and kalamata olives. It doesn’t get much better than this.

2 thoughts on “the sweet spot”