I woke up with the urge to bake. It was eerily quiet for a Monday morning, 4th of July, a holiday to be taken seriously and enter into with reverence. I had found a recipe the night before for a sweet potato cake, but somehow the flash of ‘american as apple pie’ wiped that image from the slate. I didn’t have fresh apples. But I had many jars of canned apple slices from the bounty of my beautiful trees last fall.

Old trees here in Massachusetts. I fantasized that the apple trees that grace this land are descendants from the early days of independent living in this country. When seeds from another time and another world were spread in fertile spirit, to make a new life. Independence Day can mean so many things depending on where you are sitting in life. I was missing my 40th high school reunion and feeling the pinch of not being there instead of here, feeling the lack of independence in this case to travel easily with two dogs in tow, the choice to bring a perfectly happy puppy into our otherwise quiet life here demanding precedence. 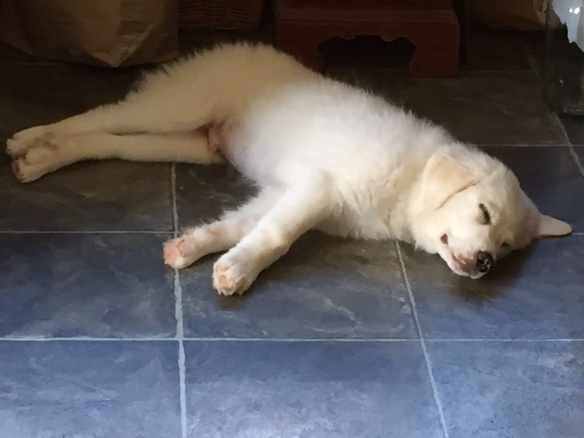 In the kitchen before sunrise, stick of butter softening in the large mixing bowl, I began to weigh and measure ingredients for an adapted recipe that would substitute plain whole milk yogurt for the cream cheese, the jar of already partially cooked spiced apples in lieu of crisp tart fresh slices, finally, oiling and flouring a bundt pan instead of the springform cake pan the recipe called for. I was taking chances, exercising my creative freedom and giving myself permission to fail. During the construction of the batter, I considered this notion of being able to fail. For making a choice that doesn’t necessarily follow the established rules or words on paper and still hoping it will come out the way we want it to. We have the freedom to make a choice without fully taking into consideration a complete accounting of outcome. And if we don’t like the outcome, we have the choice to accept it or not. Not unlike how the Constitution of this United States puts down rules for freedom to make choices, hopefully in a way that allows life to flow the way we want it to. But we never really know for sure do we? It is the protection of that choice that is so very precious.

Fifty years ago I would have spent the bulk of hours during this celebrated holiday with my nose in a book, languid hours spent doing nothing other than flowing with the thread of a story into the promise of a swim or a barbecue or fireworks, rules that have guided the way of this holiday for as long as I can remember. Now, family and friends far flung and me living a solitary life. The rules of the holiday seem very far away and I am left with the purity of my creative freedom. Feelings are mixed. I have to reckon with the melancholy of letting go in order to enter the joy of anticipating something new. There is no bypassing the grief that can surface unknowingly and without warning, for times long gone past.

So I made cake. Fragrant moist apple cake*** that kept me right here and made a memorable breakfast too. On the scale of failure to success, it had all the makings of a full blown success. Even though the use the bundt pan didn’t quite work and the cake had to be extracted in large pieces to be cooled.

The combination of canned apples with the density of eggs yolks produced a perfect custard like crumb. I recommend eating a piece while it is still warm, with a spoon. I shared it with my friend and neighbor Peggy later as we had afternoon drinks in her art studio while looking at some of her new work. Reflecting on the holiday, she smiled and said, “You know that this is a day most artists typically spend in their studios too…”

Once the cake was known and tasted, I went to work on the new quilt that has taken over my own studio.  It began as an experiment, 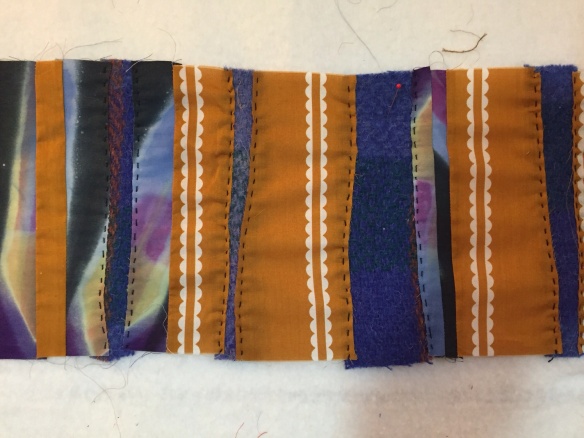 and has developed into a vision of forest in winter. It transports me back to six months ago when the world was white instead of green, except here the memory is still as fresh as right now, for every piece of fabric placed and line of stitching made.

I really like this piece. I can feel the momentum, also familiar, to push through the work ahead to get to that place I can’t see yet. Eventually bringing me back around to gratitude for having the freedom to see the world differently every single day if I so choose. Happy Independence Day indeed!

Add 2 whole eggs one at a time, beating well after each one
+ 3 more egg yolks

6 thoughts on “american as apple”